There are some occasions in life when only cake will do.  This weekend was no exception, Big Man´s Granddaughter was celebrating her 7th Birthday, so cake was most definitely needed. No comments please about me being a Step Granny…!

I have seen various versions of rainbow coloured cakes around for a while, from mini cupcakes, to regular sized ones with splodges of different colours, to multi tiered cakes.  For a beautifully elegant grown up cake, do pop over to see what Smidge did for her birthday.

Obviously, when you´re 7 years old, you´re not looking for elegance or sophistication (phew!), so I thought that the 7 colours of the rainbow and the 7 tiers of the cake would tie in perfectly.

The cake mix I used is very simple and is not a whipped, butter version.  The benefit of this is that as I only have two Victoria sandwich tins (which are 7” or 18cm in diameter and 1” or 2.5cm high), and the mixture makes enough for 3 cakes, it can stand around quite happily while waiting for the first cakes to cook.  I had initially only planned on making 6 colours, but I forgot to line the bases of the tins for the first two, and they wouldn´t come out without crumbling into a thousand pieces. Eventually I made a third batch of mixture and ended up with 7 colours.

I have to warn you that there is a little “waste” as I needed to cut the tops off the cakes where they rose and were browned (you don´t need to worry about cutting the sides off) but these crumbs could be used to make cake pops, or just eaten as is….I mean, who throws cake away?!

Apologies for the photos, the cake was assembled late at night and the decorating was undertaken by the Birthday Girl, who had great fun, and these final photos were the snaps we took.

For 3 cakes (make two batches of this mixture)

Add the dry ingredients to the wet and mix well, if the mixture is very stiff, add a tablespoon full of milk.

Divide the mixture into up to 3 bowls and add food colouring to each. You will repeat this with the second batch of mixture.

Pour into your base lined tins and bake at 180º for about 30 minutes or until a skewer poked into the centre of the cake comes out clean.

Remove from tins, when cool slice off the raised top with a bread knife. Eat crumbs with a cup of coffee whilst making the other cakes.

For the cake filling (to sandwich between the layers)

Beat well and add a little milk if the mxture is too stiff to spread easily. Put a small dot of the mixture on your serving plate and place the first player of cake on top. Spread the mixture thinly over the top of the cake and continue to repeat with all your layers, but don´t ice the top of the final layer. 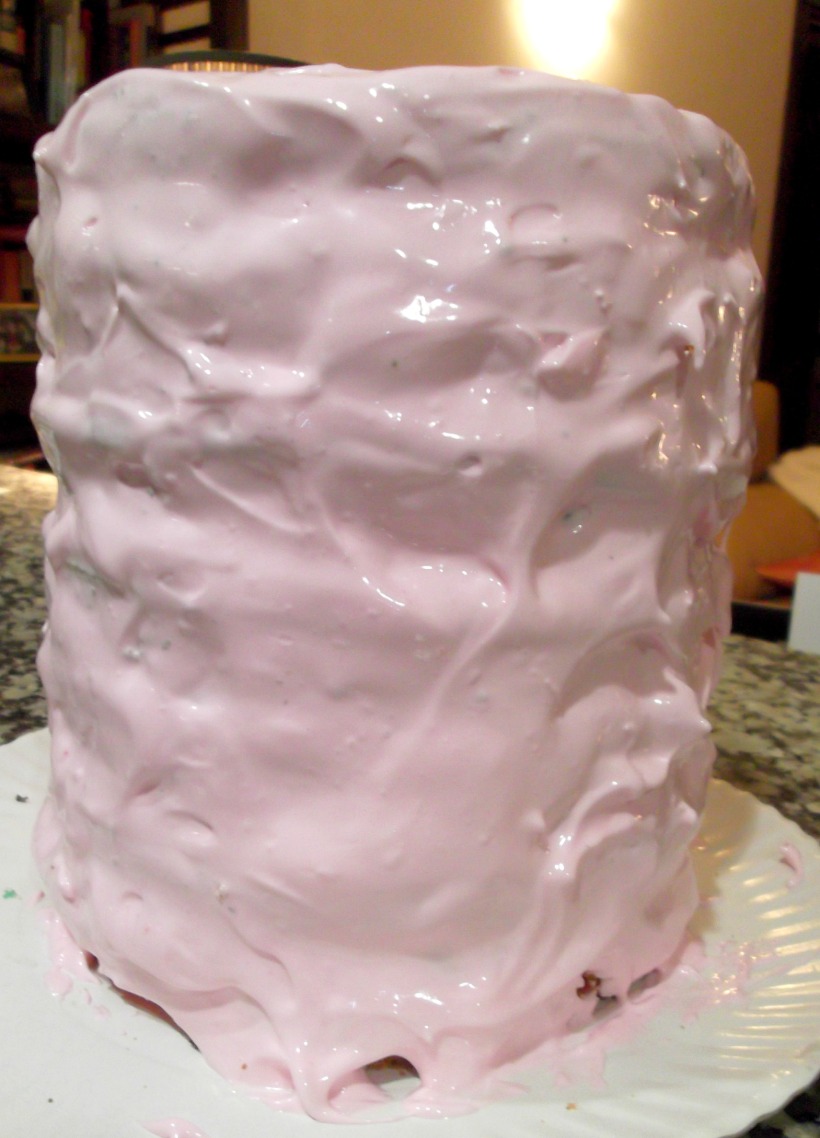 For the icing (makes enough to cover a 7 layer cake).

Now, with your electric beater (or by hand if you are feeling super energetic), mix for about 5-7 minutes until thick and fairly stiff.

Apply immediately and find a small child to help you with decorations.

PS. I don´t advocate feeding children enormous amounts of food colouring every day, but once a year should be fine.  Work off excess energy chasing small dogs round the garden until it is time to go home.