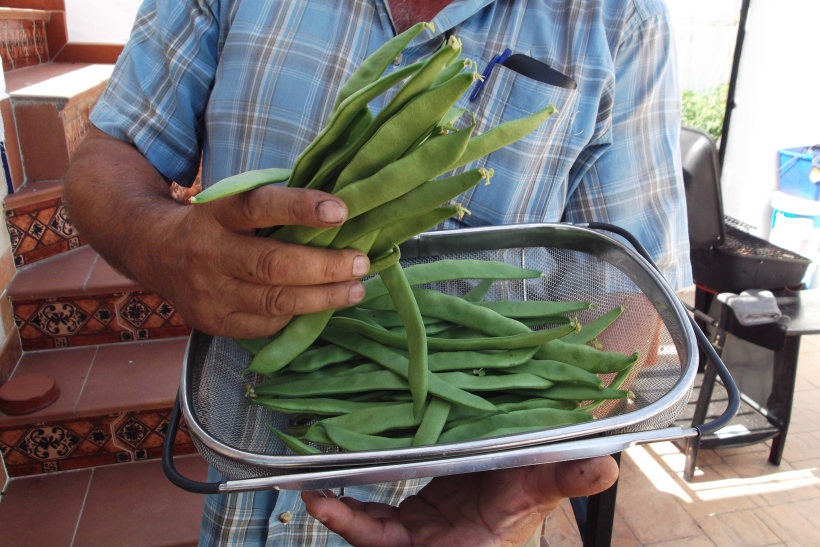 Yes, the planting is starting to deliver!  Great excitement this week with my two best friends visiting, with lots of talking, laughing eating and drinking going on.

The vegetable patch gave us its first little crop of runner beans this week, and a second picking a few days later.  Big Man, despite being the largest of the family group this week, was given the honour of squeezing in between the bean canes and picking those precious runners, making sure not to knock any of the delicate flowers (or future beans) off.

When I was last in the UK I bought a little gadget for cutting runner beans.  You snip the ends off with a little blade then run them through a hole with several blades.  Result?  Long thin strings of spaghetti like bean strips.  This means you can cook them quickly and still retain colour and flavour.

I won´t say it´s quicker than doing it the old fashioned way with a sharp knife, but you can see how pretty they look with this simple bowl of boiled beans lurking behind some barbecued hake with alioli.  We served them just  warm with olive oil and lemon juice.

Inspired by a delicious recipe over at Fati´s Recipes, I also cooked some up later in the week with mushrooms and a simple tomato sauce.

I lightly fried some sliced mushrooms.

Then I added some blanched beans (which I had chopped into little squares this time).

Finally I poured over some home made tomato sauce, a little water, seasoning and simmered until ready.

An Ex-expat's attempt to re-settle back into Germany, one cake at a time