Ok, I know this is going to sound quite off putting for many people.  Tripe is a scary old thing.  But fear not, although the word “Callos” translates as tripe, I don´t actually put any into this dish (although you could).  Confused eh?

Well, let me explain.  The first time I ever ate this dish was at a Feria in a nearby hamlet.  It´s tiny, probably only a dozen houses, but it belongs to our “Municipio” and puts on an amazing fiesta every year.  One of the first of the summer in fact. They always seem to attract a good flamenco singer, they do a fantastic paella at lunchtime, and they always have plenty of good food apart from the usual pinchitos (kebabs) and montaditos (fillets of pork on bread).  Hundreds of people attend, it´s a great event apart from the winds which whip down the mountain and make hairstyles, skirts, old people and small children blow all over the place.

So, Big Man ordered me a portion of Callos which was essentially a chick pea stew with tiny chunks of meat, chorizo and morcilla in it.  I loved it and looked up the word when I got home and though “oh lord, I´ve been eating tripe”! During the almost six years I´ve lived here, I´ve only eaten it a couple of times a year as not many people make it anymore – it´s not complicated to make, but it takes time.

Of course, I recently decided that I wasn´t prepared to wait until next summer for my fix, I´d make my own.  This is where the fun started.  I asked the butcher to prepare me whatever I needed for this dish (meat wise) and that´s when I found out that her version would not include tripe.

Strange, I thought, but let´s crack on. She (yes, we have two butchers locally, and one is a woman who looks exactly like a lady butcher should look – big and jolly with fingers like sausages) got things ready.  The goodie bag included (per four person serving):

See – not so scary after all (well, maybe apart from the blood)!  I also had to buy some chorizo and morcilla and chick peas.  I´m not giving measurements here as it´s a kind of “make it up as you go along” dish.  I then asked about 20 different people how they made Callos.  Half had never made it so were of no help at al.  The others gave me 10 different ways of making it, each with their own little “twist”.

This is what I eventually came up with, and I have to say it tasted as good as the Fiesta version, and Big Man thought it was better…modesty prevented me from saying that myself of course!

Soak the chick peas overnight and the next day cook slowly for a couple of hours with a few bay leaves, 4 cloves, and a dried chilli until completely tender.  Don´t rush this, you´ll have plenty to be getting on with while they cook.

In a separate pot blanch the all the pork products, drain and put into fresh water.  Now cook slowly for a couple of hours until really tender and drain again.  Get those kitchen gloves on and pull all the tender meat off the trotters and discard the bones (or give them to your dog who will love you forever).  Now add the chunks of meat to the cooked chick peas (still in their water).  Add about 5 or 6 whole cloves of raw or roasted garlic, some saffron dissolved in water, ½ a teaspoon of sweet or hot pimentón, the whole chorizo and morcilla (which you will slice before serving) and cook for about 30 minutes.  Leave to stand for at least 15 minutes before serving (but it´s even better prepared the day before) and remove the cloves, bay leaves and dried chilli.

Make sure you have a table full of very hungry people, don´t tell them what´s in it if they´re a bit squeamish, and enjoy.  Now go for a lie down…you´ll need it!

So, 5th January, the night before our celebration of Los Reyes or The Three Kings. Big Man and I sit quietly contemplating the last few celebrations that lie ahead over the weekend.

A family get together at our house the next day. Yes, we´re ready for that. Saturday a lunch with 10 friends in a nearby restaurant. Oh yes, we´re definitely ready for that. No cooking, no clearing up, and hopefully a lift there and back so we can kick back and relax.  And then Sunday, a meal with 10 other friends in one of their Cortijos in the Campo.  Cooking a celebratory goat.  It should be fun, the host is a butcher and a grower of grapes and producer of wines.  A recipe for a thoroughly good lunch.

Big Man gives our butcher pal a call to finalise the arrangements for Sunday and I can tell by his face and the conversation that something is amiss.  He gets off the phone and says “you know we thought we were going to Rafael´s Cortijo…” Mmm, yes I think, where is this going?  “Well, it seems everyone thinks they´re coming here”.

Oh dear. Oh well. Here we go again. Big Man does a mad dash on Saturday morning for the extras we need, I crank up the oven and get baking, and it all turned out fine in the end.

We enjoyed a lovely ham and cheese board with Spanish curado and semi curado cheeses, tetilla (do click on the link if you share my childish sense of humour), a gorgeous stinky stilton my parents bought over, and an amazing hard cheese (rather like a fresh parmesan) which is rolled in rosemary. 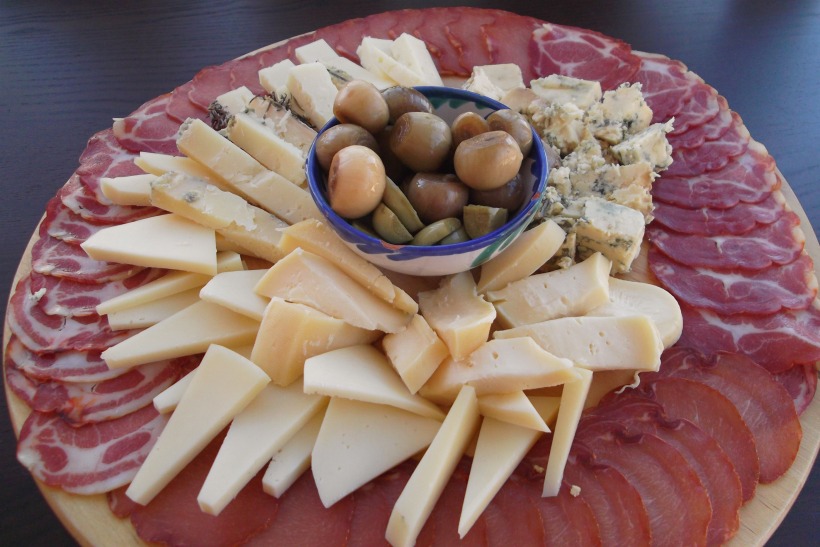 We ate home cured olives which the Spaniards were most impressed with. They thought Big Man had made them as they didn´t think a “guiri” or foreigner could make them taste so good…huh! 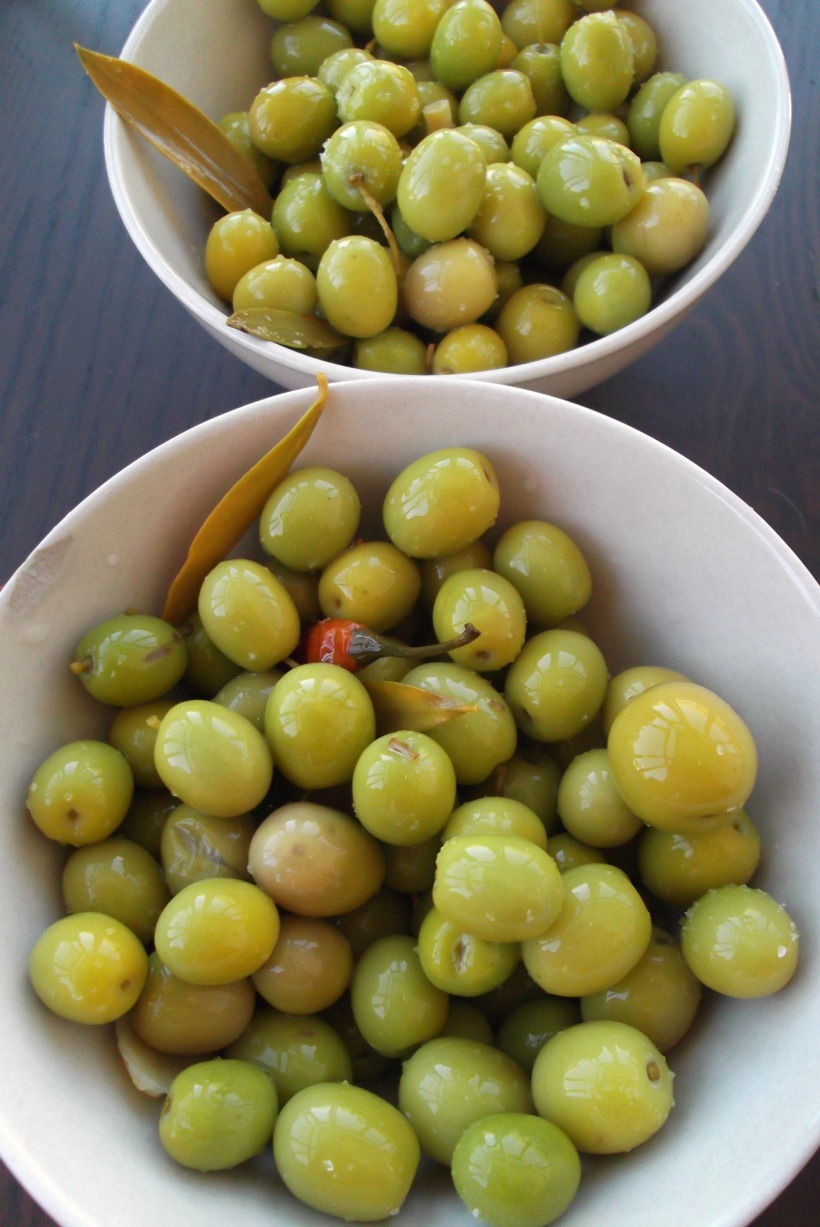 A chicory (or endive) salad with walnuts and blue cheese dressing lightened things up a bit.

Our butcher pal, Rafael, got to work in the garden doing his job. He looks fierce, but he´s really a gentle giant. 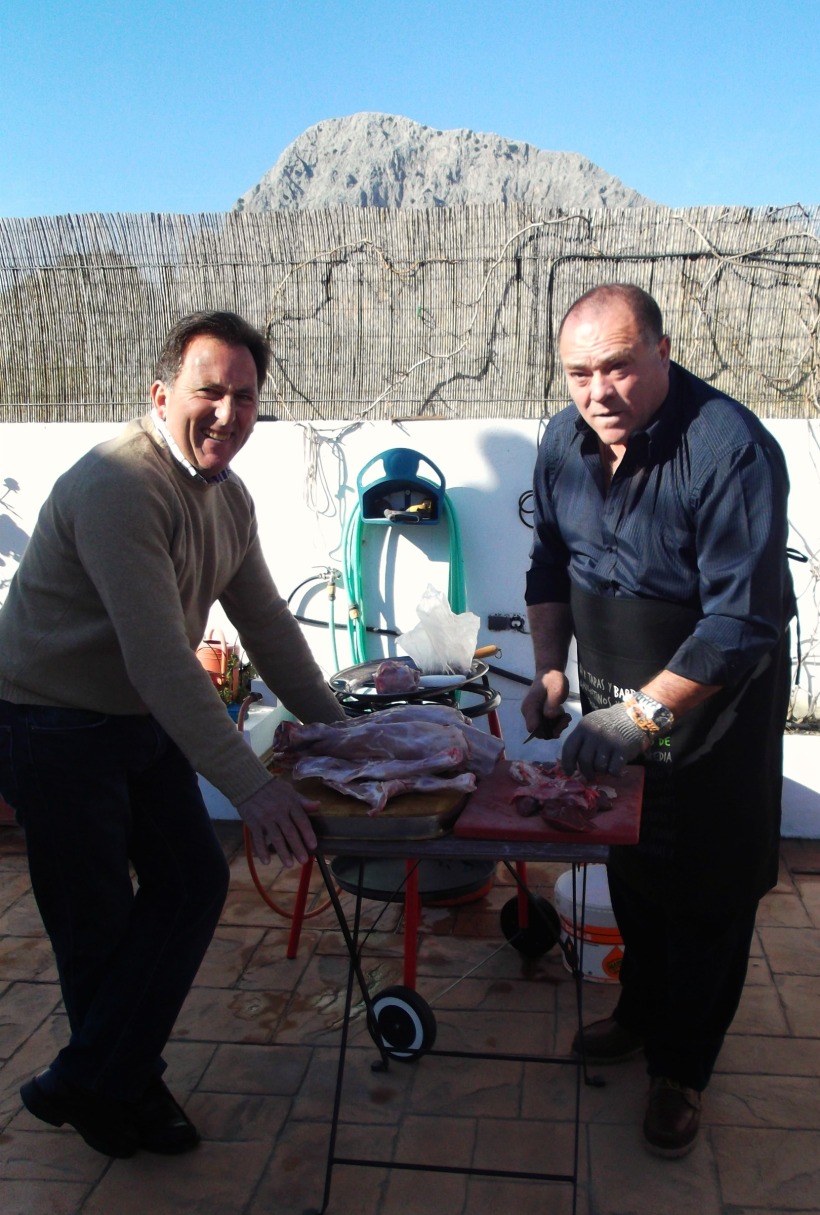 Look at the size of his hands – he couldn´t have been anything BUT a butcher! 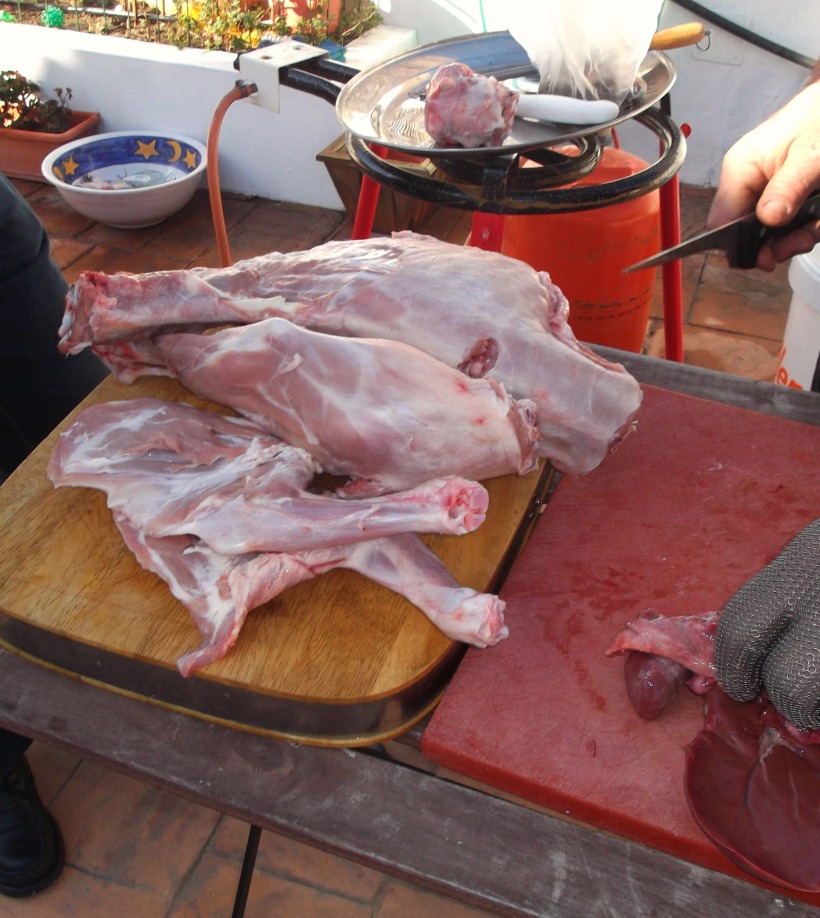 Working on the ribs.

We tucked into a plate of Rafael´s “embutidos” – chorizos and morcilla.

Of course we ate desserts too, but more of those another day as I´m feeling full up again just thinking about what we ate.

And drank.  A very messy but happy table by the end of the day.

Ok, I think I need another lie down now.

Another “Plato de Cuchara” or spoon dish – we like our pulses here in Spain.  Many of these dishes were traditional as you could feed large families with few ingredients which were not costly.  Meats are typically added at the end (usually pork products) so the beauty is that they can be vegetarian dishes too, if you prefer.

Lentils are great, as apart from being cheap, they cook fairly quickly and only need rinsing but not presoaking.

Rinse the lentils then add all the vegetables and spices apart from the salt to a large cooking pot.  Cover well with water, add the oil and bring to the boil.  Reduce the heat slightly but don´t let them come off the boil while cooking as this will make the lentils hard. They will probably take about 45 minutes or so.

When the lentils are soft, add the potato and meats (if using) and continue cooking until the potatoes are cooked. Remove the bay leaf and celery leaves and add salt (and pepper too if you like) to taste and you´re ready to serve. Slice the sausages into smaller pieces before serving. A drizzle of extra virgin olive oil and a squeeze of lemon over the top really lifts the flavour, but that´s just the way I like it!

Tastes even better the next day. 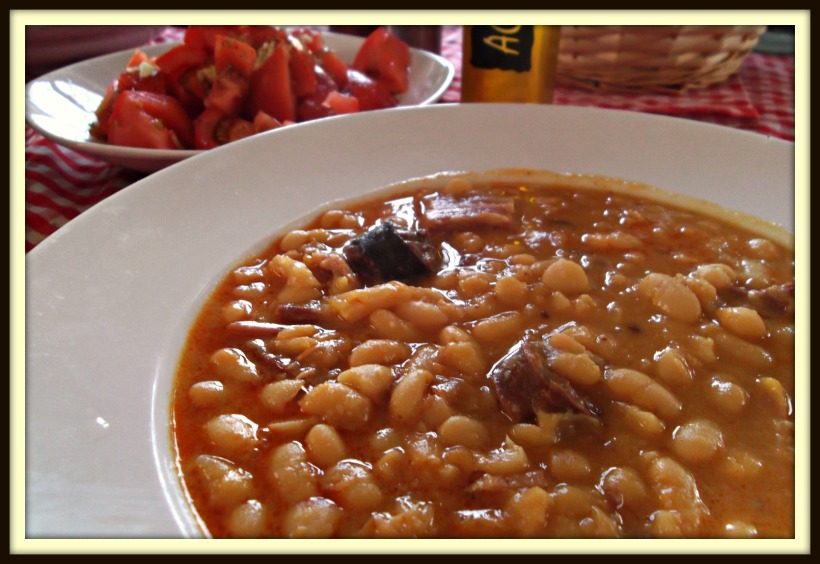 When we travelled to the distant north of Spain, we bought back some foodie memories with us. Well, a little more than memories, we bought back beans and smoked meats to make the famous Fabada.

It´s one of those dishes which needs the authentic smoked blood sausage (morcilla), chorizo and pork to achieve the “real” taste, but it also lends itself to “making do” depending on the ingredients you have to hand.

The ingredients given below can be interpreted fairly loosely to make a lovely bean, ham and sausage stew if you can´t get hold of the Asturian versions.  I also like to be lighter with the meat than some people, so feel free to add more. This recipe will serve six as a main course, but it does keep well for about 5 days in the fridge.

This dish really improves by making it the day before you want to eat it, although it´s not essential, and if you have an earthenware bowl to cook it in, even better!  The day before making the dish put your beans into soak in plenty of water.  In a separate bowl of water soak any smoked or salted meats.

Using the water you soaked the beans in, put them in your cooking pot with about a depth of  3cm of water above them.  Bring to the boil then skim off the froth which will appear. Dissolve the saffron in a little water and add to the beans (or add your pimentón or paprika directly to the water).  Now add the pork belly or pancetta, bring to the boil and skim and then repeat with the chorizo and morcilla.

Add the bay leaves, make sure all the meat is pushed to the bottom and then cook very slowly for about 2 or 3 hours.  Try not to stir as this will break the beans, shake the pot if necessary and top up with boiling water if needed.

You should be left with thick creamy beans which still hold their shape.  I like to thinly slice the meats and sausages so they can easily be eaten with a spoon.  This is a “plato de cuchara” or a “spoon dish” as they call it here.

Serve with a good robust red wine, plenty of bread and I like a tomato and garlic salad on the side. ¡Buen Provecho!

An Ex-expat's attempt to re-settle back into Germany, one cake at a time