We recently had a lovely Spanish Sunday lunch with family and friends. Lunch on Sunday in Spain, especially when the weather is good and you can cook outside, often means paella. Although it wasn’t warm enough to eat in the garden, we did manage some pre-lunch drinks in the sunshine and we fired up the paella burner to cook outside.

Starters were typical. Plates of jamón and cheese,  lettuce with anchovies, croquetas and prawns to peel and dip in alioli.

Dessert caused me a little stress.  Not making it, you understand.  Just deciding what to make. Where we come from in Spain doesn’t claim to have the most exciting desserts in the world. Pretty much every restaurant will offer the same selection. Flan (which we know better as creme caramel ). Natilla (a little portion of cold custard with a biscuit similar to what is called a Rich Tea biscuit on top). Arroz con leche (cold rice pudding cooked with cinnamon and sprinkled with cinnamon). Fruit or ice cream. Hmmmm.  Ok, but nothing to get over excited about.  The fruit is usually pretty good and depending on the season you can enjoy figs, melons, peaches, custard fruit, pomegranate and strawberries. 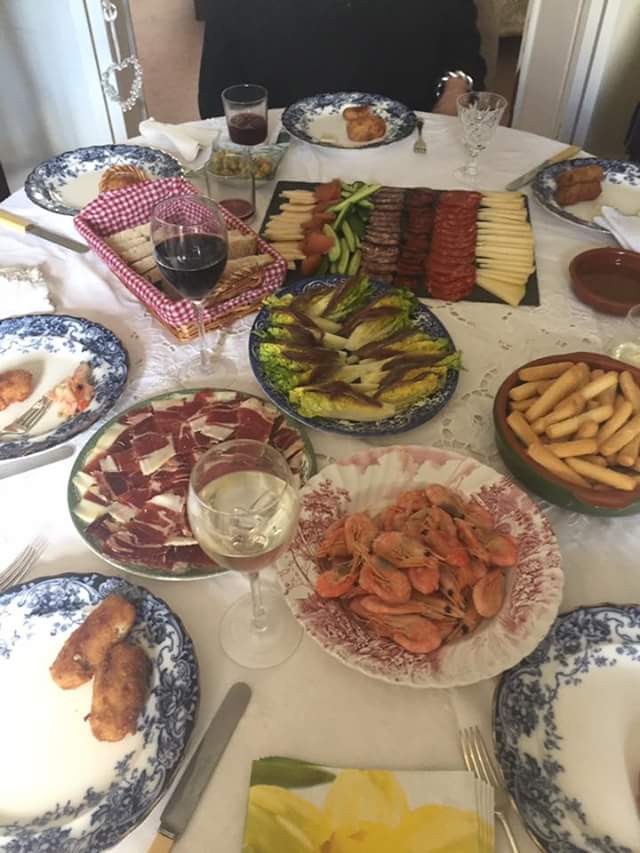 Folk seem to get their sugar fix from turrón and the little cakes, pastries and doughnuts served after a meal with coffee. I asked Big Man for advice and he requested Leche Frita which is something his family used to enjoy when he was young. The ingredients are few and cheap. It’s not a sophisticated dish and I was a little unsure as to how my lunch guests would react. I was amazed at how well it went down. They enjoyed the lightness and simplicity of the dish and the delicate flavour of the custard (which is what you make from your milk). If you’re a person who finds stirring risotto therapeutic,  this one’s for you as you can’t make it in a hurry.

Pour the milk (reserving about 100 ml and return this to the fridge) into a saucepan with the sugar, lemon zest and cinnamon. Bring almost to boiling point, stirring to dissolve the sugar, remove from the heat then cover and leave to stand for 15 minutes. 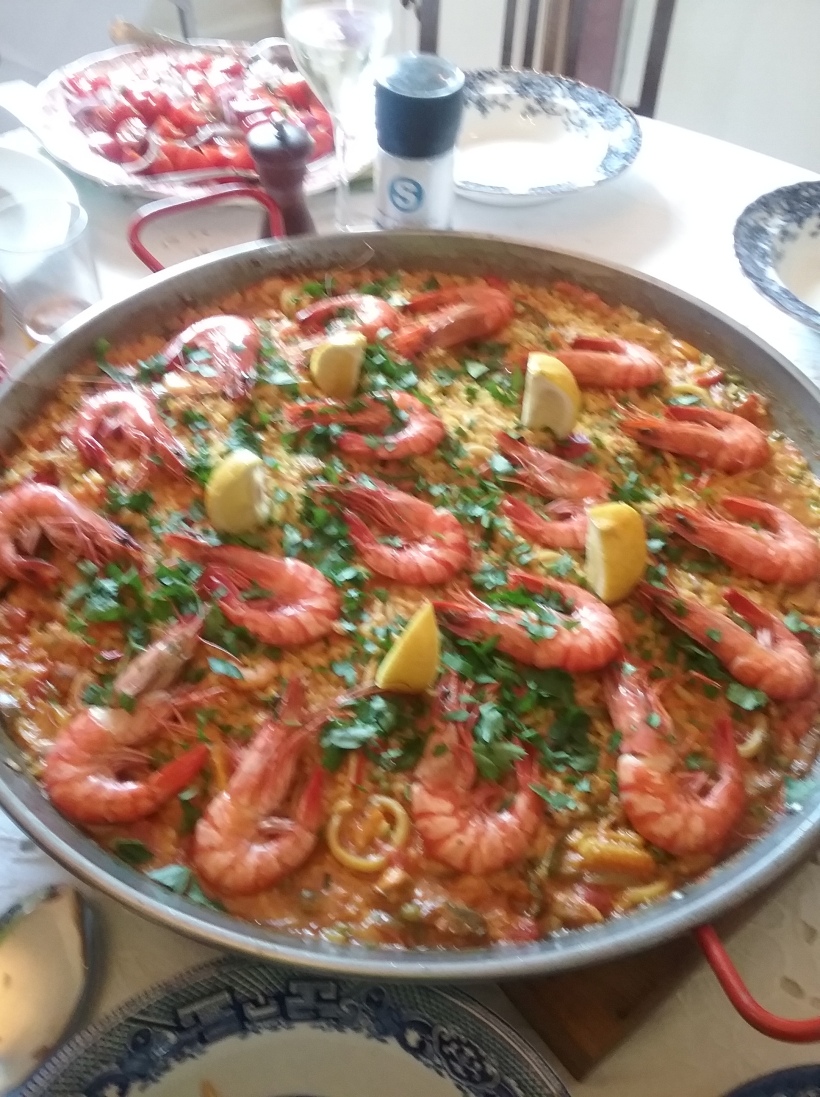 Add the cornflour to the cold milk and dissolve.  Remove the lemon zest and cinnamon from the infused milk and pour in the milk and cornflour. Heat very, very gently, whisking or stirring for about 20-30 minutes. You don’t want the milk to catch and burn while you thicken the milk. It’s ready when it has become very thick.  Run a spoon through the middle of the mixture and if it doesn’t return quickly to the middle of the pan, you’re done!

Lightly oil a shallow square or rectangular dish with some vegetable oil and pour in the thickened milk. Smooth the surface and leave to cool in the fridge for an hour or so. Ideally it will be about 2cm thick.

Prepare a large frying pan with vegetable oil to a depth of about 2cm and heat the oil. Not quite as hot as for cooking chips, but a good medium heat. Have a tray lined with kitchen paper ready and in a bowl put about 4 tablespoons of icing sugar mixed with about half a tablespoon of cinnamon.

Tip the leche/custard out onto a tray or flat board and cut it into portions (I made triangles) and dip as many will fit into your frying pan in one go into the beaten egg. Make sure the pieces are well coated and put them onto a plate until you are ready to fry your first batch.

Put the egg coated pieces of leche into the hot oil and fry on each side (a couple of minutes) until golden brown. Place onto the kitchen towel and allow to cool while you cook the next batch.

When it’s cool enough to handle, dip each piece in the icing sugar and cinnamon mix. It can be served warm or cold and keeps well in the fridge (covered) for about 48 hours. Don’t expect it to be crispy, this is meant to be soft inside and out.  You can reheat gently in the oven or microwave and sprinkle a little extra icing sugar over to serve. If you want to be a bit grand, make a fruit coulis to dip the pieces into. Lovely as a dessert or teatime treat and very typical of Andalucía.

Andalucía is a region of contrasts. Magnificent cities, historic monuments, skiing, countryside and the famous Costa del Sol.  It´s all there and usually not more than a couple of hours away from wherever you are.

At the weekend we drove slightly north from where we live, over the border from Malaga province into Granada province, Big Man´s heartland and into some wild and rugged scenery.

Near his home town of Ventas de Zafarraya is an area of fertile plains.  A huge amount of vegetables are cultivated and grown there and this provides much needed employment for many people.

Moving north again you come to the beautiful town of Alhama de Granada and between these two towns are a series of lush green plains divided by area of rough, rocky, almost lunar landscapes.

Water comes up through the rocks and provides irrigation and drinking water for plants, animals and Cortijo dwellers.

Some Cortijos sadly remain abandoned, mainly due to the inheritance laws here in Spain which pretty much oblige you to leave your property to your offspring. When families have 10 or more children, it´s understandable that families were often unable to come to an agreement regarding whether to sell, divide or buy each other out.

After a magnificent lunch of goat cooked over an open fire we set off to walk to a local goat farm and buy cheese.

There were plenty of goats… 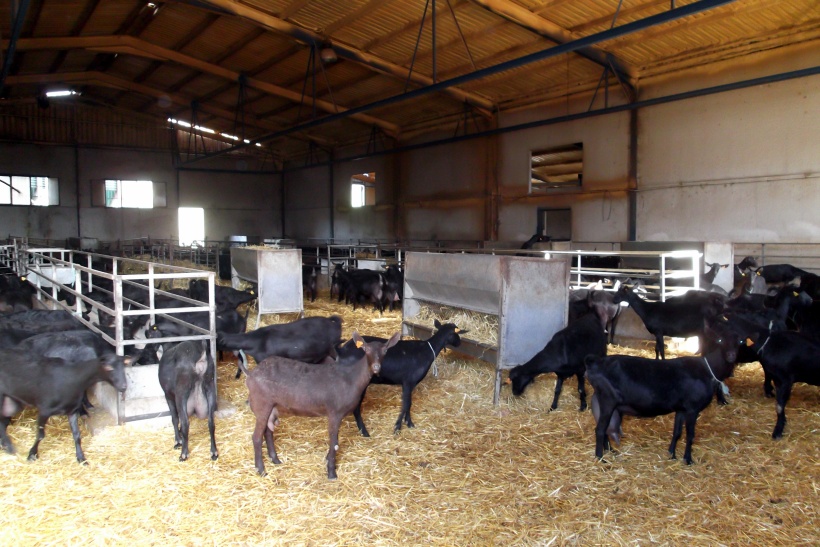 ….and it was milking time.

Some of the group also bought milk, luckily I had been given some that morning by one of our local goatherds.

There were one and two week old kids….adorable! 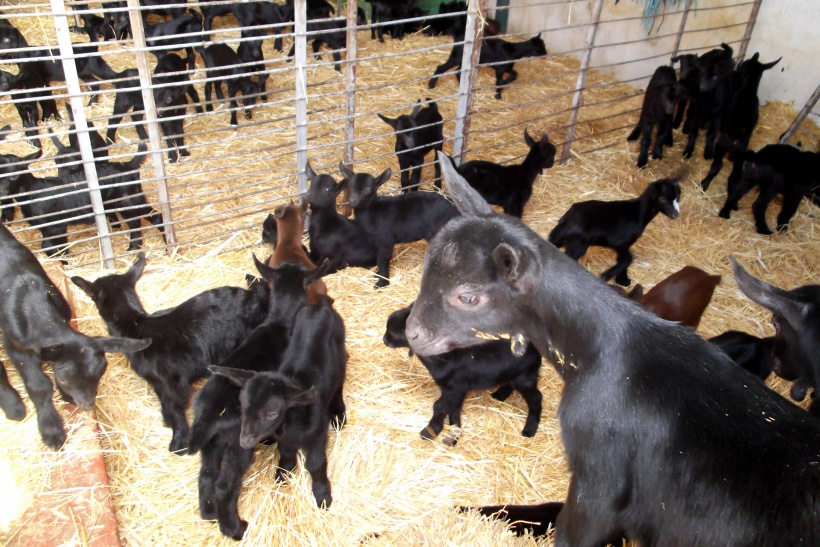 A family of strange looking turkeys were keeping everyone in line out in the yard. 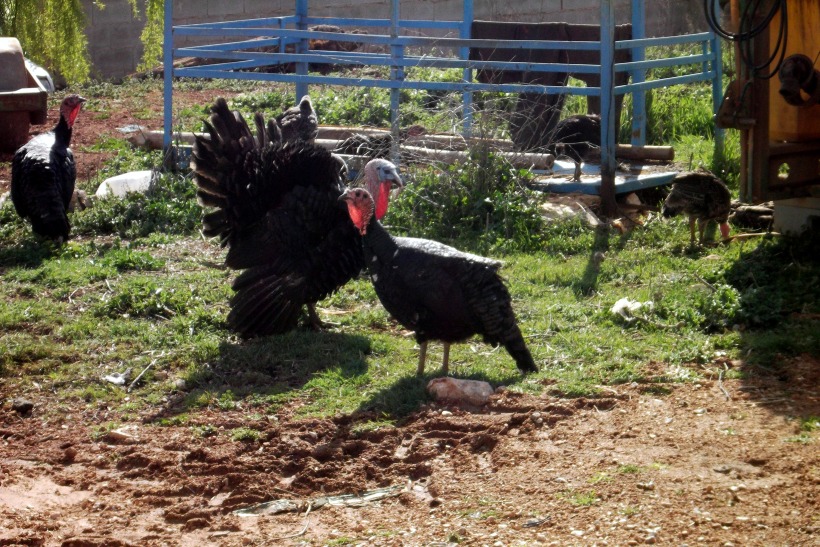 Our walk took us past a tree which the locals called a Millennium tree, because of its supposed age.

It took five women to get their arms around it….and sometimes it´s good to hug a tree!

And finally a walk back to the Cortijo for coffee and cake.  Sometimes the simple things in life are just what you need. 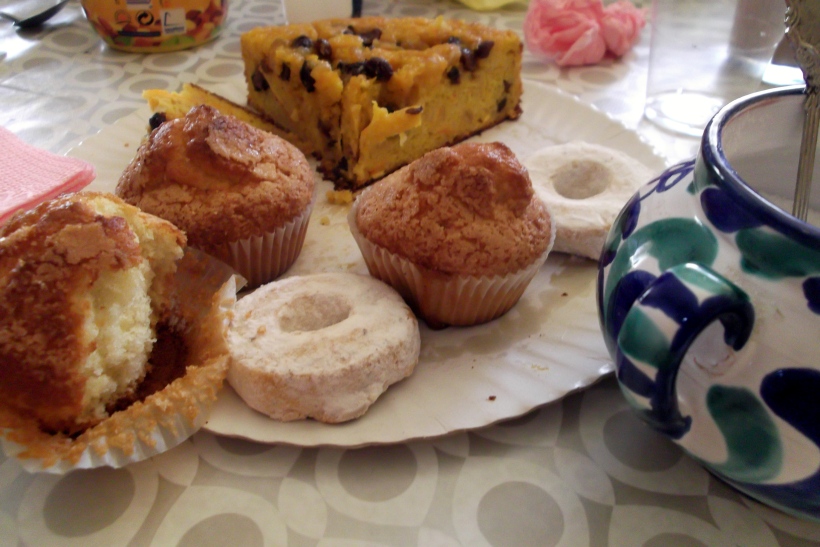 Making yogurt at home is very simple.  No need for yogurt makers, thermometers or complicated equipment. I don´t claim that this yogurt is Greek, as the milk I´m using is from Spanish cows (hopefully!) but the taste is the same creamy taste and texture is thick and gorgeous.

Are you ready?  Ok, then this is what you´ll need.

Start by heating your milk until small bubbles start to form around the edges of the pan. Turn off the heat and whisk in your carton of yogurt.

That´s it for now!  You have several options at your fingertips to get this milk to do its magic and turn into yogurt.

As it´s hot here at the moment, I put a lid on my pot and sit it in the sun for about five hours.

You can put a lid on the pot and leave it in a very, very low oven for up to 12 hours – check on it after about 5 hours to see how it´s doing.  You can even leave it overnight.

Put it into a warmed thermos flask and leave overnight.

When you´ve done this and waited patiently, your yogurt will have formed and will look like this.

Yogurt with some watery liquid surrounding it.  You could just whisk it all together and eat it as it is, it´s pretty delicious already.

To make it into Greek style yogurt you will need to strain it.  Set your sieve over a deep bowl or pot, line with clean muslin (or whatever), pour the yogurt in and leave to strain in the fridge.

I left mine overnight.

When the time is up, you are left with quite a large amount of liquid which can be used in cooking or given to your chickens!

and a lovely bowl of super thick and creamy yogurt (give it a beat to loosen it all up, then keep chilled).

If you keep back two or three tablespoons, you´ve got your starter for the next batch.

What you do with your delicious yogurt now is only limited by your imagination….!