Health and Happiness to you all, however and whatever you celebrate.

And all the very best to you all for a 2014 filled with health, happiness and togetherness. Thank you for your friendship and support over the year…here’s to the next one!

Sometimes things so dreadful happen that there are no words. Am reblogging this for my blogging friend Rosemary and her family. If you can help, please do so. My thoughts and prayers are with her and her family. On November 24, 2013 Jade took the train from Stuttgart, Germany to Strasbourg, France. Normally, she would have taken the school bus from the train station to her boarding school in Walbourg, France but she didn’t get on the bus.

Her dream was to become a fashion model and we believe that that was her plan when she left home.

Jade has lead a very sheltered life and our concern is that some person(s) might be taking advantage of her naivete and possibly holding her against her will.

An investigation and search is being conducted worldwide and particularly concentrated in France, Germany and England. It has finally occurred to me that this blog has almost 4,000 followers worldwide, and while I wanted to keep “CookinginSens” as my refuge from the harrowing…

And probably one of the best tasting too! Christmas madness is starting to kick in around here. It will be a quiet but fun affair Chez Chica and Big Man – my parents are coming for Christmas so whilst it will be a small group, the food will still be cooked and enjoyed together, glasses will be raised to loved ones not with us, and of course silly hats will be worn.

As you know, Christmas tends to be quite a multicultural affair in our home. That way we get to enjoy the best of everything. Big Man is on his way back from a trip to Spain and hopefully his suitcase is full of tasty goodies from Andalucía. We’ll be eating Panettone on Christmas morning and after lunch we’ll hotly debate whether Turrón or Torrone is better. And in a change from the roast lamb or beef we generally eat, we’re going for Goose this year. Yum…it’s been a few years since I cooked one as they’re not so good for larger gatherings as although they have loads of flavour, you need to buy one the size of a bungalow to feed a crowd.

I’m making things that I know we’ll love (why wouldn’t I?!) and I know my mum, although not a big dessert eater, loves coffee flavoured ice cream. Big Man is of the opinion that a law should be passed to make it obligatory to eat ice cream every day and my dad and I will let them tuck in whilst we tuck into the cheese and nuts.

This is a Nigella Lawson recipe, and perfect for a last minute dessert if you don’t fancy making custard…

Ingredients (makes about a litre)

Whip all the ingredients together until thick and soft peaks are formed. Pour into your freezer proof container and freeze until solid. No churning, no whipping. Remove from the freezer a few minutes before you want to eat it to let it soften a little and enjoy. See, I told you it was easy!

It’s been a while, I’m sorry. But I’m sure you understand. We’re trying to crack on with some work in our own little home before Christmas, and I thought you might like to see what we’ve done ready for Santa’s arrival.

A new fireplace! Well, it’s going to be our first Christmas here, so we felt he deserved to arrive in style.

Remember this monstrosity back in January 2013…the flat wasn’t even ours at this point.

Then we were gifted this gorgeous cast iron fireplace. 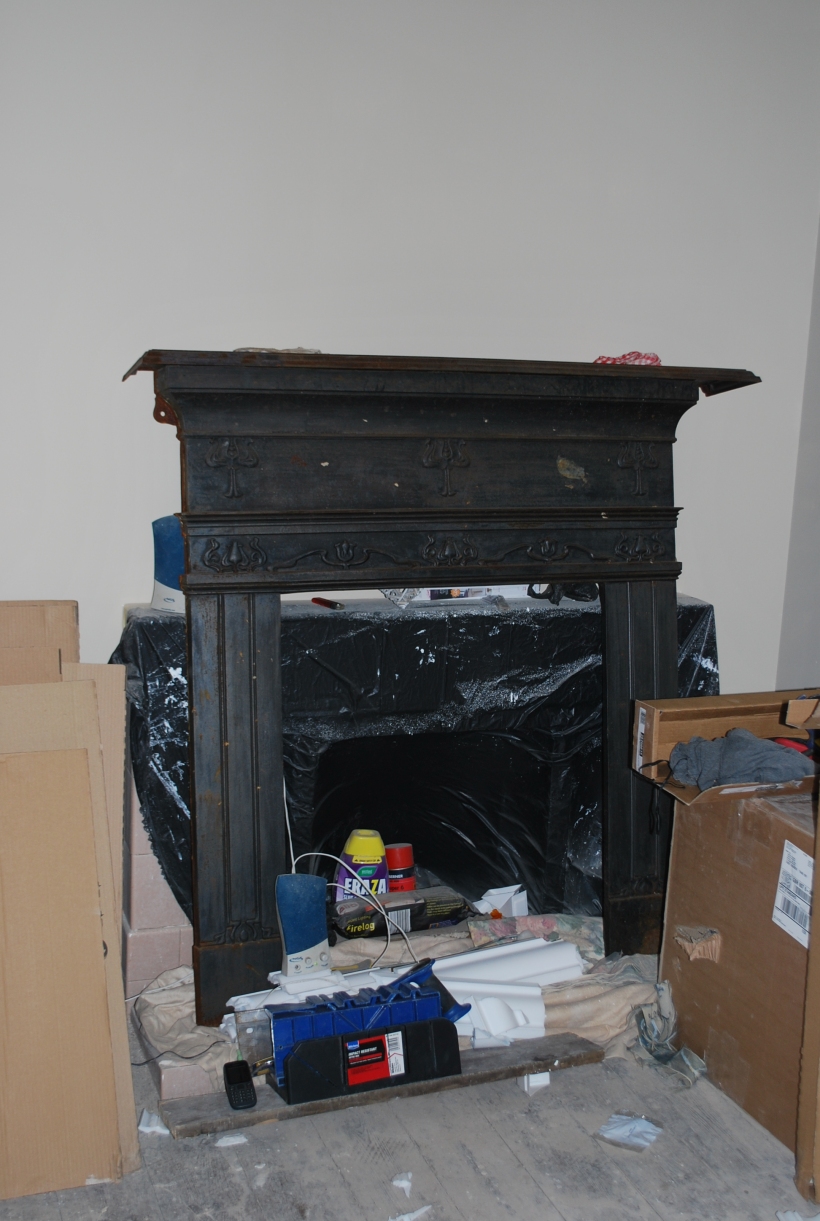 Sadly, the measurements didn’t quite work with our house and the chimney breast. But then, as if it was meant to be, we came across another one in an antique shop and Big Man got to work. He removed the old one, measured up …

Then the chimney was swept… 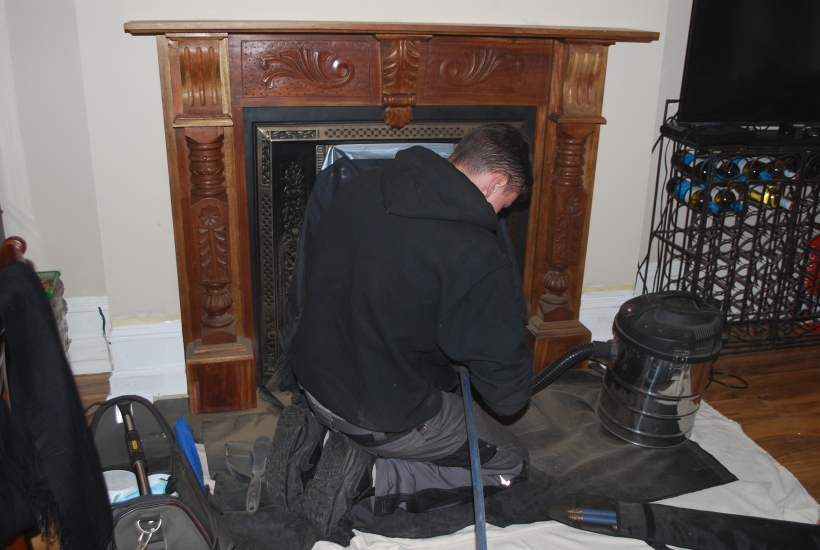 Come on Santa, we’re ready for you.

Pork belly is a big favourite in our house but from reading recipes and comments on other lovely blogs, I’ve realised that not everyone can get hold  of whole pieces of pork belly. In fact, in Spain I have to ask the butcher to not slice it up as it’s also more typical to sell belly slices.

Usually pork belly slices are barbecued in Spain but here in the UK in December the weather doesn’t really lend itself to outdoor cooking – not that I wouldn’t grab the chance if the weather was perfect at the right moment!

I wanted to use belly slices and to try to recreate some of the smokey flavours in my kitchen without setting off the smoke alarm and causing panic amongst the neighbours. Easy…use the oven Chica!

Turn oven on to almost the highest setting

Rub the pork belly slices in the mustard powder and the pimentón and season lightly.

Enjoy with a warming glass of red wine and if you have any vegetables left over, add some stock the next day, blitz and enjoy a delicious roasted root vegetable soup.

For another pork belly recipe, check out my Smokey Pork with Pimentón and Peppers or Crispy Pork Belly with Stir Fried Cabbage.

Near our village in Spain is another village with a restarant run by a lovely lady called Belén. Belén means Bethlehem in English, so although a bit unusual for English speakers, her name is quite apt as we creep up towards the Christmas season. Sorry, I promised myself I wouldn’t mention the C word until well into December and it’s only the 2nd today.

Belén runs a good bar and restaurant with all the usual offerings plus a few slightly different ones. An item on her menu is called “Guarrito” which translated means “little wild boar”. I don’t know if this is a typical dish, we’ve certainly never seen it anywhere else, so of course had to order it. And once ordered, we loved it and often go back for a little tapas of this with a glass of wine. So, what is “guarrito”? It’s simply thick slices of jamón cooked in a little olive oil (and Belén serves them on fried bread which makes them extra naughty and extra nice).

We always said that these little morsels would be fantastic with a fried egg and baked beans, in a Full English Breakfast style. Or as a supper dish. Or any time really. So of course, now we make guarrito at home in England until we can get back to visit Belén again.

To accompany the guarrito I was inspired by Frugal’s Gluten Free Potato Cakes. He uses gram (chick pea) flour instead of regular flour and I pretty much followed his recipe with the addition of some roasted red peppers.

Being the sort of Chica who always cooks army rations instead of regular sized portions, I still had a little mashed potato left the following day, so I made another potato cake to go with some grilled meat and salad.

Mix all the ingredients together and then blend with a hand blender or mash thoroughly – the mixture will be quite runny. Don’t panic!

Using a heavy based frying pan, pour in a little oil and get it quite hot. Now pour in the potato mix and turn the heat down. Cook slowly for about 10-15 minutes until it starts to get crispy. If you’re feeling brave slide it out onto a plate and then flip it back into the pan to cook the other side in the same way. For the fainter hearted, pop it under the grill until it starts to brown a little then flip and continue to fry.

Slide it out into a serving plate and enjoy your potato (pan) cake sliced into portions. Crispy on the outside, creamy soft in the middle. Now how economical and delicious is that?!